I’ll be honest with you; I did not know what Shuffleboard was until this year. I mean, I had a vague idea that it was a board game of some sort, mainly because I watched Abe Weismann do a funny bit about it in The Marvelous Mrs. Maisel.

I was under the impression that it is an antiquated game. People don’t really play a game which is called ‘Shuffleboard,’ anymore do they? Well, apparently, they do!

I just started work at this new place, its a fantastic company with great opportunities. I was really excited about the job, and I wanted to start strong.

My first day went really well; I felt like I had positive impressions on my team, and I was jazzed up. So far, so good. After we wrapped up the meeting, a team member struck up a conversation about something called Shuffleboard at a bar downtown. The atmosphere immediately became buzzed; all team members started talking about pucks and top scores and the weekly departmental ‘game-off.’

I was completely lost. They could have been talking in an alien-language for all I could understand.

Apparently, the company had a rich tradition of friendly Shuffleboard competitions; it was an informal team-building activity. The various departments of the company played against each other, and the winning department got perks like bonuses, paid-vacation, and paid-time-off.

More than that, it brought team members together as it created a sense of team pride and unity. As everyone shared jokes and engaged in friendly banter about the game, I quickly realized that you need to learn the game to be ‘a real’ part of this company.’

Well, I am not known to be a quitter. I must say I outdid myself with the research. It helps that Shuffleboards are located in bars; good food and incredible drinks, what more can a guy want?

My research not only helped me gain credibility at my new workplace, but it also helped me learn a fun new game!

Since I had all that information, I decided to write a series of articles about Shuffleboard to help others learn this surprisingly challenging game! You can read these articles to learn the game, or if you are already a player, they can help elevate your game!

Let’s begin with understanding what Shuffleboard is.

Section I: What is a Shuffleboard?

Shuffleboard is a game in which players slide round discs called weights or pucks across a smooth surface and into a scoring area at the other end.

It is a centuries-old game that was popularized in the taverns of 15th century England. Colonists and English soldiers brought this addictive game to America, where it found an ardent home. Today, Shuffleboard is played across America as leisure and professional sport. (If you want to know more about the history of the game, then read history of table shuffleboard.

Ground, floor, or deck shuffleboard is a game in which the playing field is the ground. In Ground Shuffleboard, a 39 feet long and 6 feet wide area is converted into a shuffleboard playing field. Players use sticks called cues to push the weights or pucks across the court towards the scoring area. The court can be any flat surface but it is usually made from polished wood, concrete or any other hard material which is marked with lines denoting the scoring areas.

Interestingly, ground shuffleboard is really popular in cruises where the court is made on the deck of the ship. Hence, the name Deck Shuffleboard. 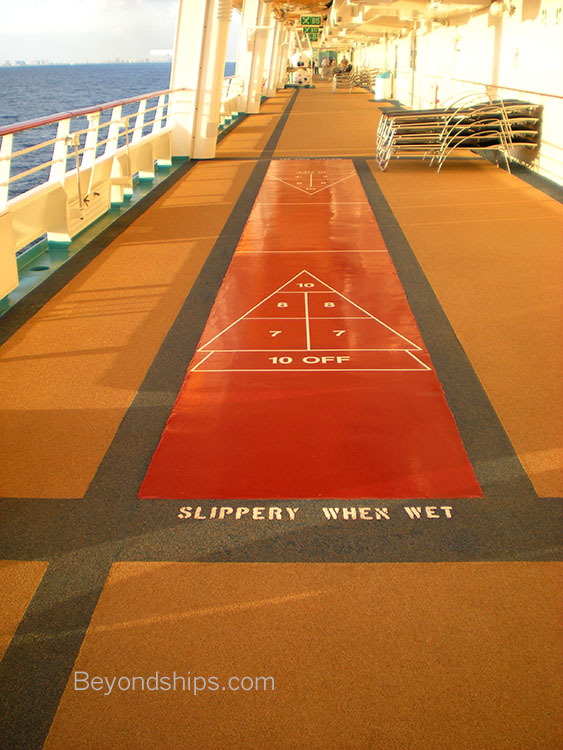 Deck shuffleboard is enjoyed by people of all ages, however, it is more popular in retirement homes.

Table Shuffleboard or simply Shuffleboard is the variation in which players slide weights across a smooth table called Shuffleboard table which is specially made for the game. The size of the table can be between 9 to 22 feet, but the regulation-sized tables are 22 feet long and 20 inches wide.

Commonly, smaller tables are housed in indoor establishments whereas longer tables are found in outdoor locations. However, spacious places may also have standard-sized tables indoors.

Table Shuffleboard is more popular in bars and pubs where people can play it as they enjoy a relaxing night. Some enthusiasts have it in their homes as well, where it makes for interesting game nights with friends and family. Table Shuffleboard is also popular in recreation centers and sports clubs. People also play it professionally; state-wise and national championships are held throughout the year. 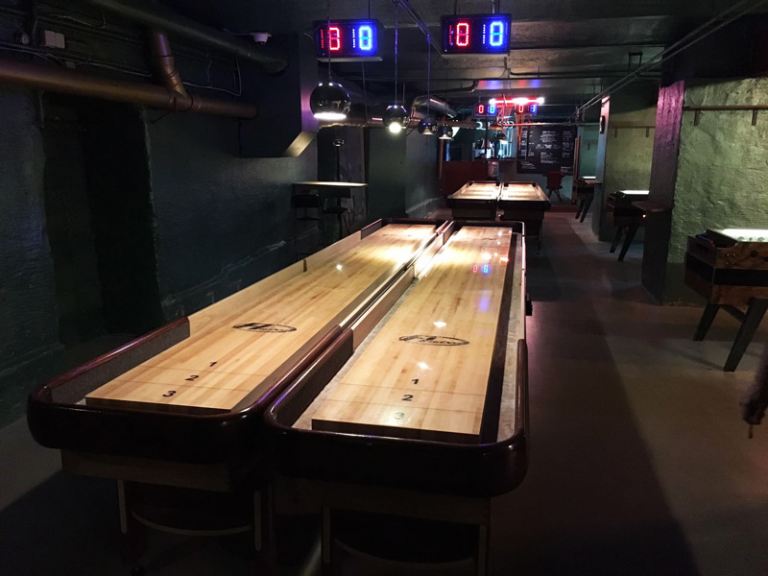 Here, we have discussed the rules for basic or traditional shuffleboard. There are many variations within the Deck shuffleboard and Table Shuffleboard. Just like a set of cards is used to play poker, rummy, and blackjack, etc., so is Shuffleboard.

Different games can be played on Table Shuffleboard or Deck SHuffleboard, each with their own rules.

The basic Shuffleboard accessories are common in both Table and Ground Shuffleboard, but there are some variations.

First, let’s take a look at the equipment which is common for both types of the game:

Shuffleboard is played with round discs called weights, pucks or shuckles. These discs are made of wood, plastic, or metal and are used in both floor and table shuffleboard. In both variations, the game is played with 8 discs with players getting 4 discs each. 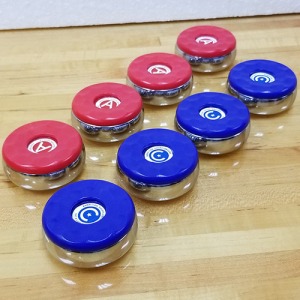 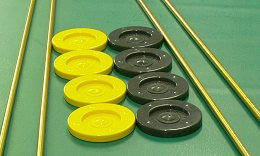 The scoreboard is a requirement in both games. In Floor Shuffleboard, sliders are commonly used to keep track of the scores of both players/teams.

Sliders are boards that have score from 0 – 75 and a moveable marker to show how many points a player/team has scored. 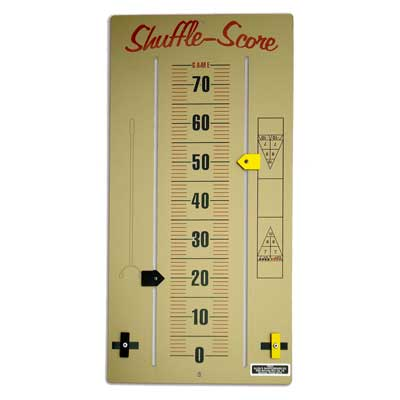 However, sliders cannot show how many frames have been played and usually, a pen and paper are used to keep track of frames.

To overcome this problem, many places use blackboards or whiteboards to keep track of points per frame. 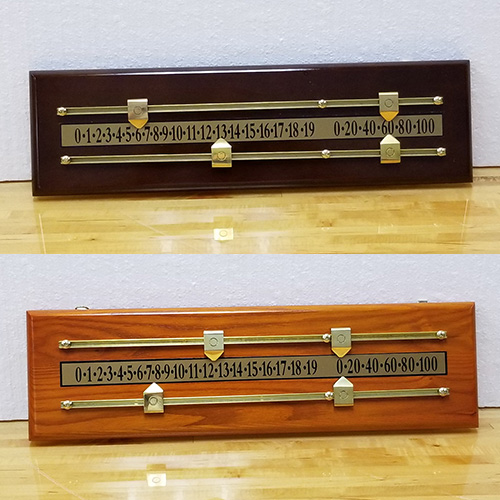 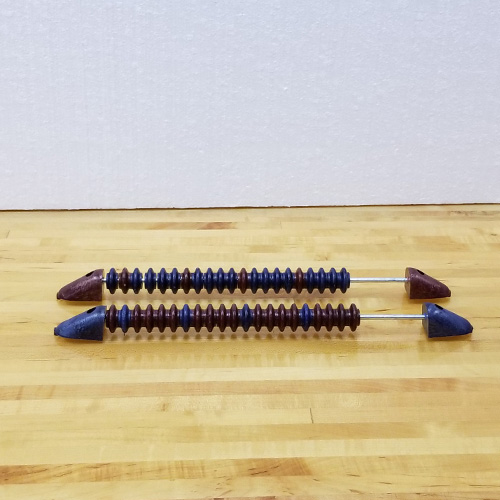 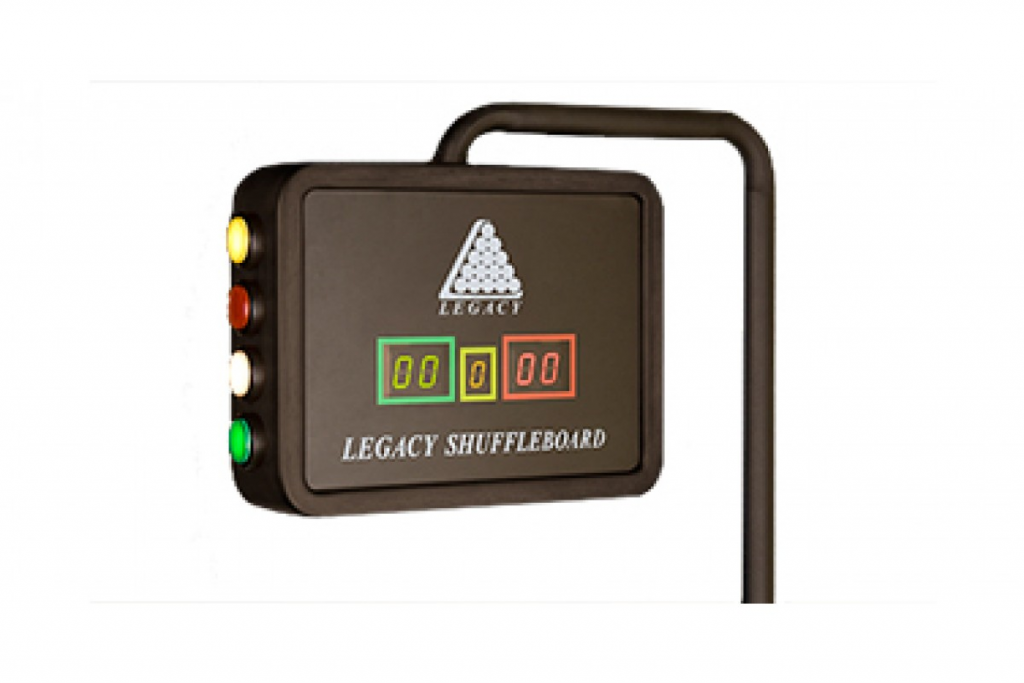 Shuffleboard wax or Shuffleboard powder is a substance that is sprinkled over the table and the floor to decreases the friction between the puck and the surface on which the game is played.

Both variations need shuffleboard wax however, the formula may be a little different for table and floor.

Both Floor and Table Shuffleboard require maintenance; the floor, as well as the table surfaces, can wear down with age, they can become rough and damaged. To maintain their smooth surface, silicone sprays, glazes, and cleaning solutions are used. 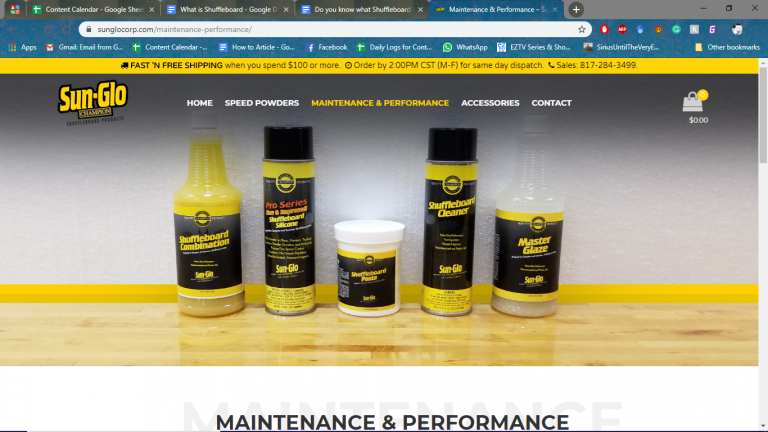 Cue sticks are used in Floor Shuffleboard. They are long sticks commonly made from wood but fiberglass and stainless steel variations are also available.

Roll-out courts are also available for playing floor shuffleboards. These innovative accessories make it possible to play the game without having to build a dedicated area for it. The court is rolled out when needed and rolled in after the game. It is great for outdoor events.

Shuffleboard tables are surfaces on which the game is played. Traditionally these tables were made from wood, however now stainless steel, chipboard, and even plastic variations are quite common.

Now that you know what Shuffleboard is, will you try it with your friends? Which one do you like more; Floor or Table Shuffleboard? Let us know in the comments below.