Pool vs Snooker: so confusing right? Have you ever been to a snooker club or a pool lounge? Do you fancy billiards? Are you a novice trying to acquaint yourself with the sport? Have you been wondering about what differentiates the variants of the game from each other?  Have too many questions in mind? Let’s just try to make it all a bit less confusing.

The easiest way to understand the games: Pop into your nearest snooker club to observe a game or two firsthand! In case you’re looking for a more detailed, theoretical analysis of the games and an objective comparison, keep on reading!

Snooker and pool are two different types of cue sports. “What are cue sports?” a complete novice might ask. Cue sports include a wide assortment of games that are played with a certain apparatus that essentially includes a cue stick, varying numbers of billiard balls and a cloth covered table bearing rails that are padded with an elastic material (like leather or vulcanized rubber) known as cushions. You might have come across one of these in a local pub or lounge.

How does this family of games diverge into the wide array of classification that we see in the sport today? There are three primary classes of cue sports that have evolved over the course of history, namely; carom billiards, pocket billiards and snooker. The prominent distinction between carom and pocket billiards is the presence of pockets along the table bed in the latter. Each of the three classes has its own set of games that are slightly different from others within a family.

Both snooker and pool are types of pocket billiards. Why regard snooker as a separate class then? The two classes may share basic resemblance, but vary substantially in terms of several dimensions such as apparatus specifications, historical significance, popularity among players and spectators, and the rules and etiquettes of the game play.

Let’s elaborate on some of the major differences among the sister cue sports here;

A snooker table is a rectangular wooden table with six pockets; four at each corner and 2 at the center of the longer rails. The game is played with a total of 22 balls; 15 of which are red in color and bear no numbers, 6 are numbered balls (1 ball of black, pink, blue, brown, green and yellow colors each) and one solid white cue ball. Other apparatus includes a cue stick to strike the balls with a triangle to rack the red balls, bridge sticks or rests, chalk for the cue tip and a scorecard.

Two players and a referee (not necessary) are the partakers. The objective is to score more points than the opponent by pocketing all the object balls in a correct sequence. Pocketing a ball means striking it tactically with the cue stick and the cue ball so as to send it wheeling into a pocket. Players start by pocketing all the red balls and colored balls alternatively before potting the remaining object balls in a least to most scoring order.

The number of points that a player earns during his turn at the table is called his ‘break’. The role of a referee is to call out the players’ scores at the end of each break and officiate the matches from start to end.

Pocketing the balls increases the points of the scorer in the following order:

Opponent’s fouls can also account for additional points for the player. A foul shot happens when a player hits a wrong ball or accidentally pockets the cue ball.

A frame ends when all the balls have been potted and 1 game has concluded. Players can decide beforehand the number of frames that will constitute a match. The player that wins the most frames comes out victorious.

Pool games are also played with a similar apparatus; a rectangular, cloth-covered, padded and pocketed billiards table, billiard balls, a cue stick and a cue ball, with the specifics however, differing with the type of variant at play. The terms pool and billiards are used interchangeably for the sake of simplicity or generality. The most commonly played of the pool games are 8-ball, 9-ball, straight pool and one pocket. 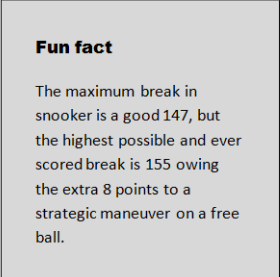 An 8-ball pool game is played with 16 balls. The players start by claiming their respective suits of balls; differentiated by design or color. The objective is to pocket one’s claimed suit before finally pocketing the 8-ball, while also out-maneuvering the opponent’s attempts at pocketing their suit. The player also has to make sure that he doesn’t accidentally pocket the 8-ball early in the game.

In a straight pool, the number of points to be scored is determined by agreement before the game commences and the player has to keep announcing or calling out the intended object ball and  the target pocket before each shot. One successful pocketing thus results in one point for the player.

Although the balls in the two games seem to be identical (to the untrained eye), it is actually not the case. The diameter of the balls in snooker is 2.0625 inches, whereas, Pool balls are slightly larger in diameter,i.e. 2.25 in inches.

There are certain markings on a snooker table that represent the baulk area drawn parallel to the shorter sides of the table. This drawing marks the ‘spots’ where the colored object balls are to be respectively placed. A pool table bears no such markings.

Pool tables conventionally have drop pockets that are receptacles for catching the balls. A ball return system is also used in modern tables where the balls are automatically channeled into a collection cell or compartment on any side of the table. Snooker does not employ any such design.

Owing to the relatively smaller size of the snooker balls, the pockets are also made smaller as compared to the pool pockets that are a tad bigger than snooker pockets due to relatively bigger ball size. Also pool pockets are spaced farther apart due to the larger table size.

Table beds are covered with a tightly-woven worsted wool cloth that is called baize and is traditionally green in color. The thickness and nap of this cloth determines the magnitude of friction and speed of the table. The cloth on larger tables is usually thinner and provides more speed and responsiveness than that on smaller tables which is more thick and nappy. Since the snooker tables are larger in size, the relevant speed of the cloth is higher as compared to the pool tables that are smaller and have a more thick  and nappy cloth.

As a general rule of physical mechanics in a stick and a ball game, the stick is supposed to have a calculated weight that is essentially 3.5 times greater than that of the ball. This means that the sizes of balls and stick are directly proportional. In a pool game, balls are larger and heavier, thus the stick also has a hefty volume. A bigger ball needs a bigger tip and a flexible shaft to properly execute a successful “throw”. In case of snooker, the players are more concerned with accuracy; hence the cues are strong and stiff. Pool cues come in few pieces and can easily be dismantled, stored and carried around.

At what point in history might have these fascinating games emerged in the world of sports? By comparison of the timeline of the historical mentions of the two games, it may be deducted that the pool games have evolved as a derivative from the classic snooker (archaic version of pocket billiards), as they seem to have emerged on the face of history 2 centuries (in the 18th century) later than the probable origin of snooker (in the 16th century).

The Neanderthal version of the billiards table was recorded in the inventory of a French king in the 14th century and had a surface made of a single stone slate with a green cloth covering the expanse and had one hole for pocketing balls. The cue sticks at that time in history were called maces and shared a resemblance with modern day golf clubs. The rails lacked any kind of padding or cushions.

Modern snooker however, finds its historical roots in the 19th century among the recreational frolics of the british military forces stationed in india. The word ‘pool’ is speculated to have been derived from the French word ‘poule’ (literally translated: hen) which means the proceeds from a won game or bet. Another speculation implicates that the word could have been derived from the verb ‘to pool’; meaning the act of combining objects or stakes. the etymological experts argue that the game received its name from the earlier players in the 18th century, who were gamblers and used to gather in the “pool rooms” to disguise the illegal activity of horse race gambling (as it was back in those days) under the pretense of a concurrent pool game.

Snooker as a game is very contemplative, thoughtful and slow-paced. The time duration is one of the factors due to which people seem to enjoy the pool games better. The average duration for a pool game is a brief 8-10 minutes, while the completion of a single frame in a snooker match can last as long as an hour. This same factor also accounts for snooker being a better spectator sport. Another possible contributing factor to the relatively lower popularity margin of snooker among players and a relatively higher popularity margin among the spectators is it’s difficulty level and trickiness that is a tad higher than any of the pool games. Besides the focus on positional accuracy in snooker, there is an added complication of navigating differently colored balls at different times. A modest approach and stance is so much more important for a snooker player than for his pool counterpart. That being said, it might also interest you to know that snooker is very popular in many commonwealth and English-speaking countries and is worth millions of dollars in terms of professional career. The sport is becoming increasingly popular in Asia, particularly in china.

So , I have tried to cover all the noted differences and tried to make you understand that Pool and snooker are two different types of pocket billiards that although seem very identical in terms of a broader relationship, are actually very dissimilar when the comparison boils down to the trivial details and specifications.

The key differences among the sister cue sports lie in the dimensions of apparatus specifications, historical significance, popularity among players and spectators and the most substantial of all, the rules and etiquettes of game play. Snooker is a contemplative, thoughtful, and slow-paced game that places an emphasis on strategic positional play.

Pool on the other hand, involves risky bank shots and emphasizes on pressure rather than accuracy. Snooker is more popular with spectators than with players and the opposite holds true for pool games due to higher difficulty margin and longer time duration involved in the former’s game play.

You can also comment below and add suggestions if you have something more to say about these games! Watch this fun video for understanding the differences clearly!