Darts is a professional sport but it is known to be the classic pub game all over the world. You go into a bar or a pub and there you can always find a traditional dartboard corner.

BDO is also a founder member of world darts federation which was formed in 1976 then there is professional Darts Corporation (PDC) that initially formed world Darts council by a group of leading players after splitting from British darts organized, PDC was established.

It is to be known that darts has been a pub game in the UK for the past 100 years. It is the game that is found common among Americans, Irish and the Germans.

The game consists of throwing a small arrow with a pointed tip that sticks into a board and can be played with many people as a group of teams. The recognition of the Dart game makes it one of the most participatory sports in the world.

The Rules of dart games are simple:

The portrayal of Dart rules

The most common dartboard designs that are used are clock or trebles. Clock is the standard international dartboard. The measurement of clock diameter is 18 inches and it has 20 numbered segments that are equal in size and it has bulls’ eye which is surrounded by a thin red ring called 25 rings.

The numbered segments have double rings on the outside of the scoring area and triple ring which is inside the rim of the circle. Also, the single bulls score 25 and inner bull like the double bull’s eye scores 50.

Darts should be few inches long with a sharp point, you should have a set of three darts that could be either soft-tipped or steel-tipped.

Place the dartboard exactly 5ft 8inches from above the ground which marks the middle of bull’s eye distance to be 1. 73m.players should stand horizontally from the toe lined mark also known as the Oche.

The portrayal of Dart rules

The BDC rules of darts where the details of DRA rules can be found and also the basic guidelines for beginners to the darts needs to be studied before jumping straight into the game!

PDC tournaments have their own rules and format of regulations, qualifications and merit status. There are several different versions of darts sport that exist that are played around the world but the common of them all is the 501 version which is also used in PDC tournaments on a standard dartboard.

In this article, you will find the commonly played version of dart rules

The professional matches start with 501 because it is simplest among other games. The object of the game is to get the score down to 50 or less while the game is ending approach to zero by throwing a double or bulls’ eye with your final dart. The basic rule is that the first player or team to reach zero wins the game by throwing three darts and then subtracting the total score from the current total to reach zero. the player should get their score down from 501 points.

When a player deducts his score to 1 or goes to zero then the player turns end instantly and the score goes back to being the same score as it was in the beginning. For example, a player has thirty-two score to get out and the first dart is a score of 16 then the second dart is a score of 15 which makes the player bust and the score goes back to 32. When they play their last turn, it is not important to throw all three darts because the player can win with the first two darts.

When a player misses a double, he can score the single of the segment. Some players might leave themselves with a split number such as 24 or 32 which doubles to be 16.

Like if a player is left with double sixteen then he hits a 16 and has a double of 8 and then if he hit on 8, he has a double of 4 so this gives an advantage to players because no extra darts are used to bring the score to an even number.

The player gets three darts to throw per turn.

Most PDC events also play this version of the game. Legs can be played by any number of players. In this game, the players concentrate on the number 19 or 20 on the board but all the numbers on a dartboard are used to play the game.

Games that are played in the leg formats are known the be the best format where the teams winning six legs in a best of 11 leg game tends to win the match.

Once you understand the order of the play, the first players try to get the highest score possible and the next player is supposed to outdo that score or lose the leg. Each player begins with three legs

If the player fails to beat the score of another player loses a leg and, in the end, the player who has any legs win the game.

To win the game immediately achieve the highest score possible.

Around the clock is one of the most popular games played on the dartboard. In this game, the player takes turns to throw three darts at the numbered segments starting from 1 to 20 and finished it with a bull’s eye or 25 in the end. The player should start from 1 and make sure the darts have successfully been thrown to the current target numbered segment.

Player who will hit all the targets and finish with the bull’s eye win the game.

In this game, two individual players or teams can play and the numbers that are in play are 19, 20, 18, 17, 16, 15 and bulls’ eye. The objective of the game is to close certain numbers on board to achieve the highest score.

It is also one of the most popular games for a large group of players. This is the basic game with different variations. The more fun to play killers is with more than three number of players and the numbers in play are usually determined by themselves. Each player could throw a dart to randomly determine his number. If you miss the dartboard or hit the already taken number then throw again.

To begin the game, the player sets several lives which is usually 5 and players to start by taking turns to target on the distributed number which scores a life when the dart hits it, 2 live is taken as double and 3 is taken as a treble. Once 5 lives have been scored by the players that player is known as a ‘killer’ until the other player wants to take one or more lives from his score. However, to become a killer the player must get exactly 5 lives and overshooting subtracts the score from the total amount surpassed. For example, a player with four lives hits a treble of his number then the first three lives scored would be taken by the player to five but the remaining two lives still be reduced and the result will be three lives of the score.

If a killer mistakenly hits on his double, he will lose his one life which makes the possibility of killing yourself in the game but it is also possible to kill your opponent by throwing three doubles.

The game ends when one player has any lives left.

It is also a very fun game to play on the dartboard. Any number of players can play this game and the numbers in play are 1,2,3,4,5,6 and 7.

The players start this game by taking turns to throw darts at numbers 1 or 2 and so on but in sequence till 7. Players should try to score as many points as possible using three darts in each turn as usual. The darts that will hit the play number will count for a score which means when 1 number is being played the highest score to achieve will be three and if the number is seven, the highest score to reach will be 21 but only if a player hits seven number three times. As you keep playing the game, the score keeps on increases.

There are two ways to win this game, first score as many highest points as you can till the end of the game or score a shanghai.

A shanghai is scored by hitting the single, double and triple of numbers in play.

In this article, all the rules are provided to play dartboard games. Now that you know the rules with their scoring system, it would be really easy to play any games you want. These rules consist of comprehensive instructions for easy gameplay and they are always based on house rules by locally played players.

It goes without saying that you want to be educated about rules of the game in order to get better at it. But proper tools and preparation is equally important. For Example, If you have the right kind of shoes, it can go along way because you have done proper research to know more about your feet and wear proper footwear and these small things can really help you to beat the competition.

If you are a lover of dart game and these rules and games might tempt you to join tournaments of dart sports but you can always go and hit your local area pub for a classic game of darts with your friends.

Share on TwitterShare on FacebookShare on LinkedInShare on Email 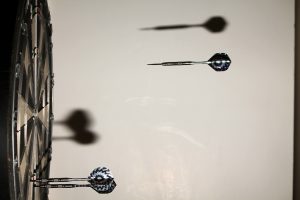 Everything You Need to Know to Win at Darts